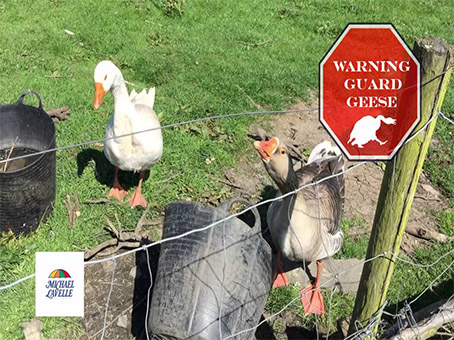 Geese squads have been spotted in the Dundalk area as home owners find new ways to protect their homes and ruffle the features of house burglars. Local estate agents Michael Lavelles, who have seen the squad in action recently, commented that anything that gets a burglar in a flap has to be a good thing”

One security conscious home owner explained: “Geese have amazing hearing and eyesight. Not only do they see better at a distance than humans do, they can also see things up close better.

Human eyes have three different colour sensors that combine to build the picture in our brain. Birds add a fourth—ultraviolet, so things look sharper to them. And they can really pick out movement.”

He continued: “Geese are also pretty rowdy and scrappy – they make some racket if they’re not happy. Put two or more geese together and you have a serious argy-bargy on your hands.”

Dundalk isn’t the first place to stick their necks out to such lengths. In China…police are reported to be recruiting geese instead of traditional guard dogs toprovide night security, after a flock of geese fouled up a robbery on a policestation.

Local Gardai are believed to be very pleased with the measure, commenting that burglars can expect to fall foul of an eager geese squad on their trail.

One local burglar who wished to remain nameless, commented: “Them lads have some neck…”